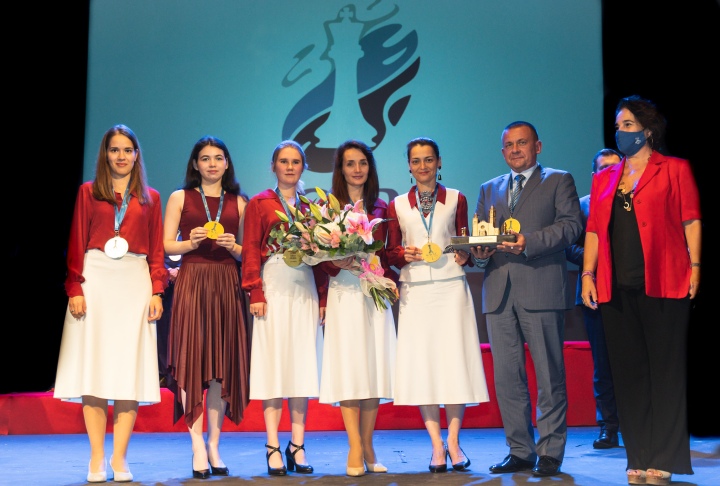 The Russian players, competing in Sitges under the denomination “CFR Team”, are the winners of the Women’s Team World Championship, held in the coastal town of Sitges, Spain. It was a truly dominant performance by CFR Team, winning every single match and scoring 35 board points out of the 44 games played.

However, their rivals in the final, team India, didn’t go down without putting up a good fight. During the first match, Vaishali R blundered an exchange with 30.Rd5 and lost shortly after, but her teammate Harika managed to defeat Goryachkina and put a tie on the scoreboard.

The clash between Katerina Lagno and Bhakti Kulkarni was one of the most entertaining ones of the day, with both players going for the most aggressive alternatives, but Lagno emerged from the opening with a clear edge and never let her opponent get back on her feet. Meantime, on the fourth board, Mary Ann Gomes had a favourable position, first, and a healthy extra pawn in the ensuing endgame, but a heroic defence by Kashlinskaya gave the Russians a narrow victory: 2½-1½.

In the second set, CFR Team seemed to have the match under control from the beginning. Vaishali went for a dubious line in the black side of a Sicilian against Polina Shuvalova, who found all the right moves to punish the lack of development by the Indian player. No player managed to break the balance on the top board, so Dronavalli and Goryachkina agreed to a draw in a rook ending. Vaishali, with black, forced a perpetual check against Kosteniuk in a position where she didn’t really have anything better than that.

The decisive point came in the third board, where the unstoppable Katerina Lagno won once again, raising her personal score to an astonishing 9/10. This time her victory came in a double-edged rook and bishop endgame with 5 pawns for each side, where back’s majority in the queenside proved decisive.

No sportsperson is truly happy after losing a final, but the performance by the Indian team was no short of memorable, and it didn’t take long for the smiles to return to their faces. The team led by Dronavalli made history by winning its first medal in this competition, despite the last-minute absence of Humpy Koneru, who was affected by travel restrictions and couldn’t make it to Sitges. With Korenu on the first board, India could have surely dreamed of getting the gold, and for sure they will be one of the teams to watch for in the 2022 Chess Olympiad in Moscow.

The Women’s World Team Championship was played this year under a new format: two pools of six teams each, followed by a knock-out playoff with the eight best teams. The time control has been reduced to 45 minutes + 10 seconds per move, with two games to be played each day. This format allowed for the tournament to be played over just seven days instead of twelve, like previous editions, which makes it easier to stage, and more likely to count on the participation of all the top guns. More importantly, the changes seem to have succeeded in raising the interest of the fans, with the knock-out adding some intrigue and excitement.

As FIDE’s General Director commented in our first report, “It is an experimental format, and we are not planning to make it extensive to the Olympiad or other tournaments. After holding this event, and the World Teams one next year, we will carefully weigh the pros and cons. We are aware that breaking is easier than building, so no changes are introduced unless there is strong confidence that they are needed. That was the case with the World Teams, and we hope that the new format will breathe new life into this competition”.