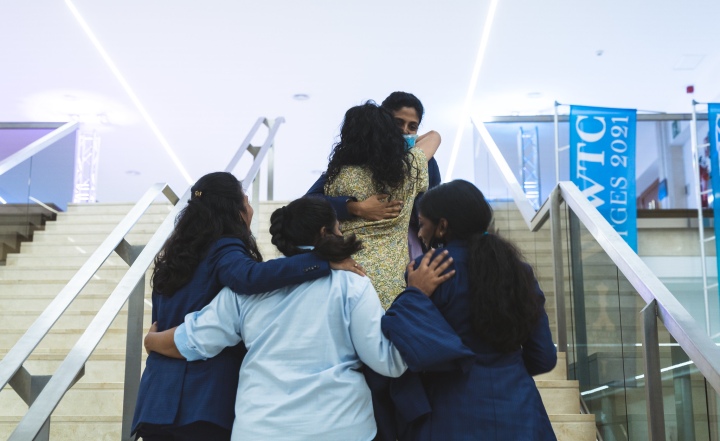 India will face off CFR Team for the gold

After the pool stage, it was already clear that the central question in the tournament was what would be the team to challenge CFR Team for the gold. The Russian players were simply swamping the opposition, and it was almost unquestionable that, in their current form, a very serious accident should happen for them not to be on the podium.

In the end, it was India that earned the spot to fight with them in the final, but their path was far from easy. The first seminal match between India and Georgia was a very close one, and it ended in 2-2, but the Indians were close to snatching the victory. In the first clash, Nana Dzagnidze settled for a quick draw against Harika Dronavalli. The same result would appear on the second board shortly after, in the game between Vaishali and Batsiashvili, while in the lower two boards the teams exchanged blows: Mary Ann Gomes won a very good game against Salome Melia – with a King’s march included – while Kulkarni lost in the time scramble a game that should have ended in a draw.

For the second match, both teams introduced some changes in the line-up, with Arabidze jumping into the battle and Salome Melia taking a rest, while India lined up Tania Sachdev. Again, a draw was reached in the first board, while Batsiashvili played poorly in the opening with White, and found herself lost very quickly against Vaishali. Javakhishvili scored the only victory for the Georgian team in an excellent game against Mary Ann Gomes, while Tania Sachdev chalked up the final and decisive point for the Indian team. The Indians could not hide their joy after reaching a final that means the first medal ever for their country in this competition.

In the other semifinal, CFR Team faced their toughest rival so far. Ukraine, led by the Muzychuk sisters, is always a candidate to win any event they play in. The first set was tense and very close, with three draws in the top three boards. The match was decided in favour of the Russians thanks to the victory of Kashlisnkaya (pictured below) against Osmak.

The match was far from over, though. Only yesterday, the Ukrainians hit back after losing the first round against Armenia, forcing a tie-break, and today they showed up after the short break with a determined look on their faces. The result was indeed an exhilarating fight with lots of emotions, where all the four games reached a decisive result: three victories went for the CFR Team, and one for the Ukrainians. In the clash of two former world champions, Mariya Muzychuk and Alexandra Kosteniuk, Mariya got away with the full point. It was the first defeat of a Russian player in the whole competition so far, but their performance is still impressive: out of 36 games, they have won 24, drew 11, and lost only one.

The final will be played tomorrow at 14:00. In the eventuality of a victory by the Russian players, the organizers have opted for the same solution adopted during the Olympic Games. Instead of the Russian anthem, the Piano Concerto No. 1 by Tchaikovsky will be played.