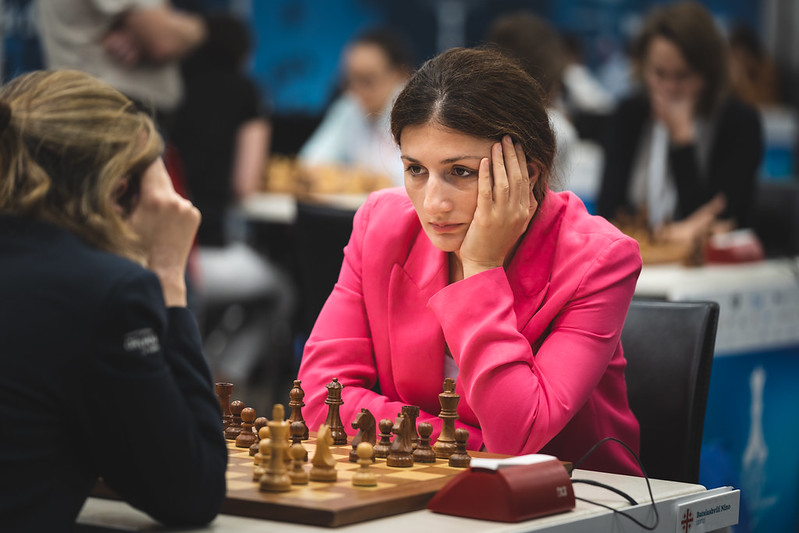 Being deprived of playing under their own flag has not affected the morale of the Russian chess players: if anything, it seems to have given them an extra motivation. The team headed by Aleksandra Goryachkina, who turned 23 yesterday, bulldozed through the pools stage, winning all their five matches by a wide score. Moreover, they haven’t lost a single individual game either: from 20 games played so far in the competition, they have won 14 and drew 6.

The dominant performance by CFR Team is the main sensation of the event. The Russians will advance to the next stage along with India, Armenia, and Azerbaijan, while France and Spain were sent packing. In fact, the Azerbaijani had a bit of luck on their side against the host country: they had an inferior position in two of the games, but the Spanish players managed to ruin it and suffered a severe loss that put an end to their aspirations in the tournament.

India, second in the group, lost – like everybody else – against CFR Team, but they also conceded a draw against Azerbaijan. Without Humpy in the team, they would need to improve their performance if they want to have serious aspirations to win the event, or even to aim for the silver.

In the pool B, Georgia come on top, with a much more discreet performance than the Russians. Three victories and two draws was good enough to lead the group, one point ahead of Ukraine and Kazakhstan. Nino Batsiashvili, with 4/5, and Lela Javakhishvili, with 3/4, are the top scorers in the Georgian team, while Nataliya Buksa (4/4) and Dinara Saduakassova (4/5 )are the best performers among those in the chasing teams.

The FIDE Americas team, that englobes players from all the continent, managed to qualify in the last moment, despite having won only one match. The 3-1 loss they suffered in the last round, against Georgia, was good enough to leapfrog Germany by half a point in “board points”, which is the main tie-break. The Germans will have to say goodbye to Sitges, same as Poland, which suffered probably the biggest disappointment in the competition.