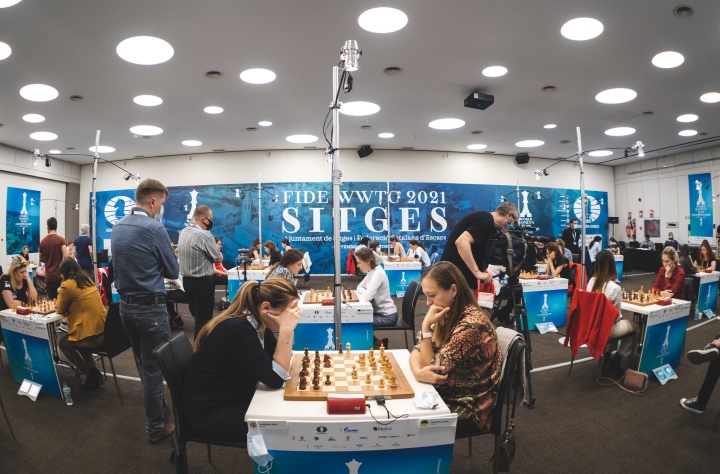 The FIDE Women’s World Team Championship kicked off yesterday in the coastal touristic resort of Sitges, a mere 25 km ride from Barcelona airport. This town is not new to chess: in 1934, it already hosted an international tournament of the first level, with the participation of Tartakower, Spielmann, Lilienthal, and the legendary Spanish champion Ramon Rey Ardid. The local chess club, “Casino Prado”, was founded that very same year and has remained very active during all these decades. In recent times, this tradition found continuation in the Sunway Chess Festival: its 8th edition took place last December, being one of the very first open tournaments being held since the start of the pandemic.

The Women’s World Team Championship is played this year under a new format: two pools of six teams each, followed by a knock-out playoff with the eight best teams. The time control has been reduced to 45 minutes + 10 seconds per move, with two games to be played each day. This format allows for the tournament to be played in just 7 days instead of 12, like previous editions, which makes it easier to stage, and more likely to count on the participation of all the top guns. More importantly, it is also expected to raise the interest of the fans, with the knock-out adding some intrigue and excitement.

“It is an experimental format, and we are not planning to make it extensive to the Olympiad or other tournaments. After holding this event, and the World Teams one next year, we will carefully weigh the pros and cons. We are aware that breaking is easier than building, so no changes are introduced unless there is strong confidence that they are needed. That was the case with the World Teams, and we hope that the new format will breathe new life into this competition”, said FIDE’s Director General, Emil Sutovsky.

One first consequence of these changes became evident during the first day of play for those lucky ones who were present in Sitges: the new format is great for team building. In the break between the two rounds, all the team members gathered together around their respective coaches in the lounge, discussing the strategy for the next match, or simply trying to boost team morale. This created a very nice atmosphere, barely seen on any other chess event before.

Talking about team morale, the Russian players seem to be highly motivated, and they won their first two matches by storm: 4-0 against Spain and 3½-½ against France. The squad, composed of Kosteniuk, Goryachkina, Lagno, Shuvalova and Kashlinskaya, competes under the denomination “CFR Team”, due to the WADA sanctions against Russia. Athletes from this country cannot wear their flag or use the name “Russia” at any event in the category of World Championship. Fortunately, these restrictions will not apply during the Chess Olympiad next year in Moscow.

Different name, but the same formidable team: the Russian ladies only conceded a draw in the game between Aleksandra Goryachkina (who celebrates her birthday today) and Marie Sebag (FRA), and are the clear leaders in their group (A), with two victories and 7½ points. They are followed by India and Armenia, both with one draw and one victory and 4½ board points. Vaishali, for India, and Sargsyan, for Armenia, won both their games on day one.

The host team, Spain, will struggle to qualify after having lost both matches. CFR, first, by 4-0, and then India, by 2½-1½. A disappointing start that relegates them to the last position.

In group B, no team shows the same dominance as the Russian in the other pool. Georgia and Kazakhstan are on top of the standings with one victory and one draw each. The Georgians lead, with five board points out of eight games. The major surprise was the bad result by the Polish team, that lost both their matches. The winners of a silver medal at the Baku Chess Olympiad 2016 had a bumpy start: one of their top players, Karina Cyfka, had to be replaced at the last minute before travelling to Sitges. Then, they lost both their matches by 1½-2½, first against FIDE Americas and then against Germany.